For the second year in a row, the European Environmental Bureau (EEB) has ranked us as one of the leading companies in Europe in the transition to renewable heating. We were also included in the list of companies working towards a greener future for our planet last year. 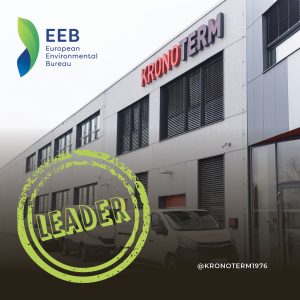 Our company is one of the industry leaders, together with Europe’s largest network of environmental NGOs, calling on legislators to support a green heating transition. The goal of fossil fuel phase-out is supported by all 19 European companies listed as leaders by EEB this year.

As part of its Coolproducts campaign, the European Environment Bureau (EEB) has published a Brand Audit of European heating appliance manufacturers, which rates domestic heating companies on the climate friendliness of their products. The study revealed that 19 of the 49 companies included in the survey were ranked as climate leaders this year, showing that the European heating sector is ready to move away from fossil fuels. Last year, only 5 other European companies were ranked as climate leaders alongside us. Progress is clear, which bodes well for the future and for the realization of our common goal.

At the same time, we are proud that our commitment to a cleaner environment is recognized not only by the European institutions but also by our customers. It is an honor for us that with the use of our environmentally friendly heat pumps, they are reducing their carbon footprint and making a major contribution to preserving the environment and, above all, to cleaner air. We are pleased that our efforts and of course our products are in line with both European and international climate goals.

You can read all the other details about our listing in the full EEB report.