News > EXPERIENCES OF OUR CUSTOMERS: “WE CHOOSE LOWER COSTS AND A COOLING OPTION”

EXPERIENCES OF OUR CUSTOMERS: “WE CHOOSE LOWER COSTS AND A COOLING OPTION”

On a hill overlooking the Vipava Valley stands an idyllic one-storey house surrounded by a lush garden. Throughout most of the day, the scorching sun shines through large windows. This was one of the reasons that made the Slokar couple replace their gas furnace with our ADAPT heat pump which enables heating in winter and also cools spaces during the summer months.

Mr and Mrs Slokar built a small one-storey house a couple of kilometres from Ajdovščina. After spending a couple of years in this house located in a sunny area with a splendid view of the Vipava Valley, they discovered that, while enjoyable, the sun can be a somewhat unpleasant companion in such a living situation, since the house became quite hot during the summer months. They were looking for a solution combining the need to cool the house in the summer with the possibility to provide cost-efficient and environmentally friendly heating during the winter months. They opted for the ADAPT heat pump which, in addition to the aforementioned solutions, also has a domestic water heating function. 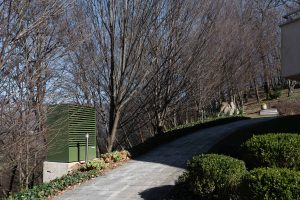 Compared to other heating sources, heat pump heating is an extremely cost-efficient solution. The savings compared to gas heating that the Slokar couple used before can amount up to 60 % or even more. Gas is increasingly expensive; in addition, the future of gas supply is questionable or even uncertain due to current geopolitical events. Another positive reason for heat pump heating compared to gas is the fact that the former is a much more environmentally-friendly solution. Since they live surrounded by nature, the Slokar couple truly wanted an environmentally-friendly heating solution with a lower carbon footprint. The heat pump uses renewable energy sources (water, air or soil) for its functioning. The average share of electricity used for the operation of the device represents only 20 %, while the remaining 80 % of thermal energy comes from renewable energy sources. 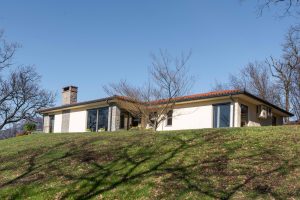 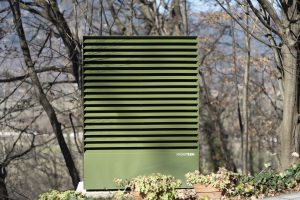 A HOME THAT IS WARM DURING WINTER AND COOL DURING SUMMER

The 185 m2 one-storey house with a four-eaved roof has separate living quarters and sleeping area. The largest amount of sun shines into the house in the living quarters, which is why the Slokar couple urgently needed a solution to cool them. “Since the heat pump has a heating and cooling function, we decided to opt for this system,” said Mr Slokar. “We saw the need to cool our house in the summer. Because of the location, the house gets quite warm during summer months.”

The ADAPT heat pump has several functions: in addition to efficient heating and cooling of rooms, it also has a domestic water heating function. The functioning, installation and external appearance of the ADAPT heat pump can be customised. Its extreme efficiency and intelligent customization have helped it secure the top spot in terms of seasonal efficiency in Europe; in addition, this heat pump is also extremely environmentally-friendly due to the completely new refrigerant R452b which does not cause any damage to the environment and the carbon footprint of which is 67 % lower compared to existing refrigerants. 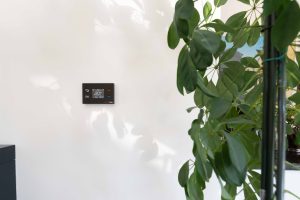 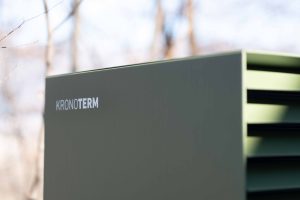 BECOMING ONE WITH THE SURROUNDINGS

The couple adores nature, which contributed decisively to their purchase of the plot of land behind the house. During construction, they only cut down three trees while leaving the remaining part of the small forest untouched. The house is therefore surrounded by a garden and lots of greenery, which is why the olive green colour of the ADAPT heat pump blends into its environment, making it practically invisible.

Its minimalist, monolithic appearance is further accentuated by the fact that the external unit of the device is available in six colour versions, thus enabling the customers to choose the version that they like the most and that fits best to the architecture of the building and its surroundings. In addition, the external unit needs no weather protection which could interfere with the architecture of the building or the surroundings and could also incur additional costs. The design of the ADAPT heat pumps has received several awards: Archiproducts, Big SEE and Made in Slovenia, in the framework of which the heat pump was presented during several notable and important design weeks in Europe.

Replacing the heating system was an extremely simple and quick procedure since not many adjustments had to be made. “The replacement itself took one day since everything fit perfectly. The new device is connected to the system and that’s it, there are no issues,” said the owner when asked about the heat pump installation procedure. The comfort and the simplicity of use of the heat pump is further complemented by remote control management. For this purpose, Kronoterm developed the CLOUD.KRONOTERM web application which allows you to control your device from anywhere, at any time. Using mobile devices, the owners can therefore set various operating schedules for the device while also having access to numerous settings enabling the most efficient operation of the device, thereby incurring the lowest costs.