Own production and development 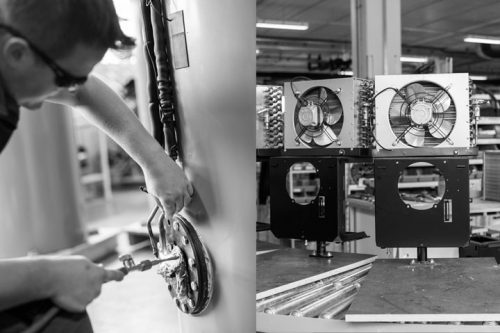 CONTINUOUS DEVELOPMENT IS THE KEY TO SUCCESS!

Kronoterm d. o. o. is always guided by the desire for continuous development of more and more efficient, ECO-friendly and reliable devices which match the customers’ requests. This is why our KRONOTERM programme currently features more than 70 different models of DHW heat pumps and more than 90 models of heating heat pumps as well as a number of special solutions for our OEM customers. A team of qualified engineers is responsible for continuous improvements of the serial devices and for the development of new generations of heat pumps and special industry systems. We use advanced and modern technology which includes cutting edge equipment for planning, construction and testing of devices. Beside our own development, the company also intensively and indirectly participates in development and improvement of certain cooling system components with renowned companies such as: Alfa laval, Honeywell, Tecumseh, Copeland, Ebm Papst, Ziehl Abegg, etc. Our long-time external collaborator, professor Smerdelj from the Academy for Industrial Design is in charge of ergonomics and design functionality as well as an appealing external design.

Reliability and efficiency are the basis for reliable and long-term operation of the product. Because the company’s vision is built on reliability and quality, we have our own development laboratory where we conduct our development and testing of new products. The laboratory covers more than 300 m2 with two testing chambers and three very precise calorimetric stations which will now enable performing the most demanding energy efficiency measurements of heat pumps in the wide spectrum of operational conditions. The investment into the measurement equipment itself has exceeded half a million Euro but, in the words of the head of the laboratory, it will enable top research work essential for the development of new and better heat pumps. He put special emphasis on the meaning of the new laboratory for the development of new products:

The laboratory is also very important for the production of heat pumps:

For the company as a whole, this acquisition means:

OWN PRODUCTION AND EXCCEPTIONAL FLEXIBILITY 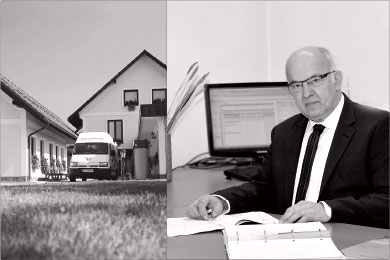 RUDI KRONOVŠEK, the founder and current procurator of the company Kronoterm d. o. o., who has been working in the field of heat pumps for over 43 years, was employed in Gorenje on scholarship; he took over the development of freezers directly after finishing his diploma at the Faculty of Mechanical Engineering in Ljubljana. At the time of the first energy crisis at the beginning of the 70s, he was the initiator of the Slovenian production programme of heat pumps in Gorenje. He developed the first generation of serially produced DHW heat pumps. With the disintegration of the company Gorenje RR and the discontinuation of certain departments, particularly the development departments, he decided for an independent career and thus established the company Termo-tehnika d. o. o. in 1990 (the new company name is from 2017 Kronoterm d.o.o.).

In a small business building he and three co-workers set up a temporary workshop and developed an entirely new generation of DHW heat pumps. The first series of heat pumps were modular versions for installation onto boilers and mostly for contractual customers – the boiler factory Lentherm Invest. The initial quantities were between 70 and 100 units per year. Experience and needed knowledge in the field of cooling systems resulted in Termo-tehnika expanding their field onto other programmes such as cooling chambers, drying devices for wood and hay, cooling devices for wine, industrial cooling devices and systems, use of waste heat, etc. The technology for wine cooling was developed further by the company; it has equipped some hundred small and also some large winemakers with the entire cooling technology.

The growth in interest for DHW heat pumps was the reason for the company to expand the programme with modern, beautifully designed and functional products in the second part of the 90s; the company has also increased the number of employees and actively focussed on promotion and marketing which led to great success – their yearly production was raised from 30 to 40 per cent. Beside the dealers and installers, their larger customers remained: Gorenje GTI, Gorenje Tiki, Termo-tehnika from Novo mesto and Lentherm Invest from Lenart. After many years of testing and certifying the devices on the institute SIQ for verifying safety and adequacy of the devices the company Termo-tehnika signed a contract for the supply of heat pumps to one of the biggest European producers of DHWs – Austria Email in 2004, this company has remained their biggest export partner up to the present date. In 2010, the founder and director up to that date Rudi Kronovšek handed over the management of the family business to his son Bogdan Kronovšek; he himself still offers his help to the company and cares for the satisfaction of users of heat pumps and other products. THE MISSION OF THE COMPANY has always been design, development, production and implementation of high-tech devices for economical and environmentally friendly heating and cooling. The commitment to the activity is one of the core values ​​of the company, which builds its reputation on professionalism and expertise. Continuous investment in knowledge and development, advanced technology, strategic partnerships, quality and flexibility of production and services, technical support to partners and customers, and highly qualified service support are the values ​​and advantages that make KRONOTERM d.o.o. with the KRONOTERM brand recognized as the most professional and trustworthy company.

In the further development and operation, Kronoterm aims to expand the production and marketing of DHW heating systems, heating and cooling facilities, as well as waste heat recovery. The basis of all development is the production and marketing of heating and cooling systems tailored to the needs of customers. At the same time, the motto is the exploitation of renewable energy sources in the cheapest possible way, and thus reducing the consumption of fossil fuels and environmental pollution. 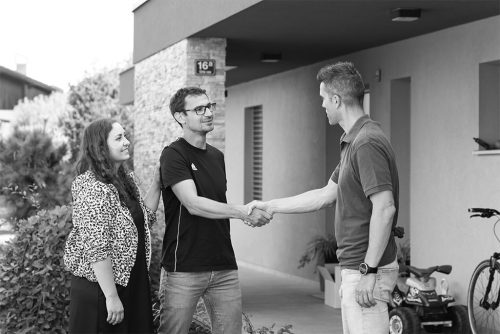 The decision to install a suitable heating system in new buildings as well as in renewing existing systems is not easy and can mean a big investment or a never-ending problem for the next 15 years. To help you with this complex decision and clarify the operation of the system, present the advantages and disadvantages as well as limitations of heating with a heat pump, the company offers a qualified team of consultants and sales engineers. We help you with planning, designing, choosing the optimal system according to the possibility of using various heat sources on location, we oversee the realisation and ensure the end optimisation of the whole system. We do all this free of charge because our company believes and advocates the fact that the correct planning and realisation are key in efficient and reliable operation and customer satisfaction. Choosing the heat pump with the KRONOTERM brand will quickly turn out as a wise decision. With 6000 DHW and over 1000 heating heat pumps sold we have been the leading Slovenian company in the field of heat pumps for many years; at the same time, we are more and more present on international markets. 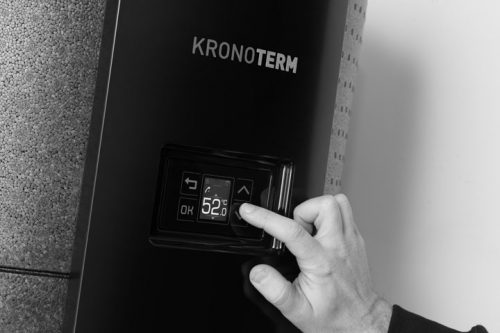 Kronoterm’s story of success continues. In 2012, their DHW heat pump TČ2VZRT/E-321ECO NT won best result in efficiency among all measured heat pumps of various manufacturers on the Swiss institute. According to standard EN 16147 (A15 / W10-55), which has already been established among all manufacturers in the last two years, the heat pump achieved a heating number of 3.1.

In June 2015, which marked the 25th anniversary ofKronoterm’s market presence, their heat pump KRONOTERM WP2 LF-301E repeated their success and surpassed the milestone which no tested heat pump was able to achieve on this institute thus far! In accordance with the standard EN 16147 (A20 / W10-55), we achieved the best result among all producers – COP 3.8! The test results can be seen at www.wpz.ch

We set the milestones of efficiency even higher in January! We were the first among competitors to achieve the magical coefficient of efficiency of 4.0 with the heat pump WP2 LF-302E, for which we also obtained the TÜV certificate.

What do the results mean for the end customer?

The numbers alone which this kind of heat pump offers cannot be of any use for the end user. The construction improvements of the ECO model mean that it is possible to heat the same amount of water with more than 10% lower costs than so far. The difference between heating DHW with a heat pump compared to conventional heat sources is now even greater in favour of heat pumps. We have also lowered the use of electricity in stand-by mode for additional 22%. Your savings can be even bigger!

What does this result mean for the company Kronoterm?

To have the best heat pump on the market is undoubtedly a great privilege, but this privilege requires a lot of effort. This result testifies to the effort put in development in form of continuous searching for better and higher quality solutions, ever more efficient components and the simplest possible operation for the end user. The new production facilities have an even better monitored and higher quality production process. These kinds of quality products open up new sales opportunities onto foreign markets as well as ever more customers who cherish technologically advanced products and want high savings with the purchased device. Despite good results the development of DHW heat pumps continues. In the words of the owner of the company Mr. Rudi Kronovšek, the DHW heat pump is a product which every home should have. Using the Kronoterm heat pumps means savings and helps the struggle for a cleaner environment (lowers the atmospheric CO2 footprint) and its purchase creates jobs. The experience of customers and the number of installed devices in homes show the product is worth your trust. 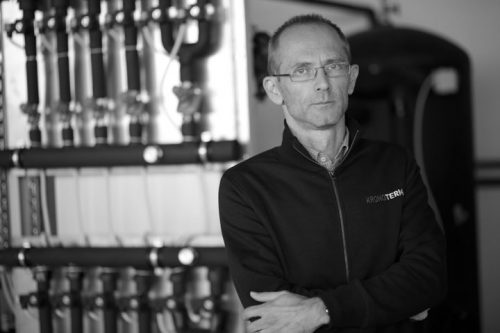 RDS AND AFTER SALES OPTIONS

Our own production ensures all spare parts of KRONOTERM devices are in stock and always ready for replacement which is especially important during cold winter days. The quick and effective service is one of the key advantages over many competitive providers. Our team provides Remote Diagnostic Services (RDS) – Wherever your location, you are always connected. We can assist you with the skilled professional management, which can monitor your heat pump to identify a problem and fix it. 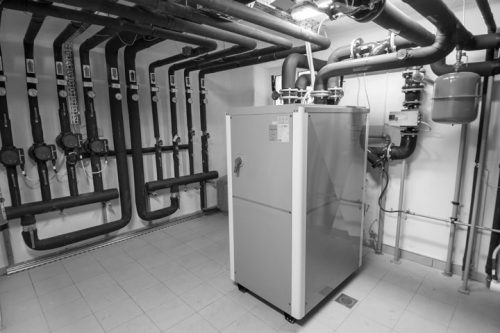 MORE THAN 70,000 SATISFIED CUSTOMERS SPEAK FOR THEMSELVES